The squirrel is the Native American symbol for preparation, trust and thriftiness.

Squirrels are known to put on elaborate food burying displays to deceive onlookers. Presumably, the fake burials are intended to trick potential thieves, such as other squirrels or birds, into thinking that they have stored their food stock there.

An observer planning on taking the stash will then focus on the bogus burial site, allowing the squirrel to safely bury the real stash elsewhere.

It’s long been thought that squirrels don’t remember where they bury their nuts, but a gratuitous Princeton study found otherwise:  grey squirrels are quite adept at finding their nuts.

Where I got it:  Where we live there is an abundance of gray (or “grey” if you’re British) squirrels.  I do not recall seeing gray squirrels before, but they’re as common here as the brown ones.  Their tails are about one and a half times as long as regular squirrels and twice as fluffy.  And they’re gray.  Everything else is the same though.  Anyhow, it was inevitable that I would eventually happen upon a gray squirrel carcass.  I was now pretty adept at head removal, so no drama there.  But I decided I really needed to dig into the process of processing skulls.  I realized that my current method of processing (i.e. doing nothing) was losing me teeth and bones.  I had already lost several rabbit teeth (more on that later), and I wanted a complete skull (one that I didn’t buy, anyway).  This squirrel hadn’t died a particularly violent death, at least as far as its skull was concerned, so here was my first shot.  After much googling, I finally came across Jana Miller’s blog which highly details the process of maceration to remove flesh from bones, sterilizing, and whitening.  If you are thinking of trying this yourself, the absolute best guide to maceration that I’ve found is Ms. Miller’s blog.  There are, of course, other methods of cleaning bones, the most common of which is the use of dermestid or skin beetles. These little guys strip bones clean but leave the bone intact.  It’s probably the most efficient and least messy way of processing bone, but this was not a good route for me because keeping dermestids is like keeping any other pet – they have to be housed, cleaned, and fed.  I’m really more interested in dead things since there’s zero care involved.  I diligently followed Jana’s guides and by the time I pulled everything out of peroxide to put back together (bones fall apart, teeth fall out – that’s life), I found I was missing both top incisors (!) and a nasal bone.  I was disappointed in my failure, but I knew they had to be around somewhere – we still lived in the same place and the feds hadn’t been here to clean the scene yet. Squirrel molars are tiny, so I was surprised that I’d managed to hold on to those (gluing them back in the right place took hours though – when I would hold one, the pads of my fingers were too fat to actually place the tooth, and they’re like puzzle pieces; they only go in one way.  There was a lot of dropping, hoping, and cursing involved).  So I looked.  I mean I looked for those teeth and that nasal bone.  I thoroughly combed every place I could think of, but my searching proved fruitless.  I gave up and resigned myself to the fact that I had yet another incomplete skull.  And that squirrel skull sat on my shelf that way for months.  My collection grew around it, and there it sat, mocking me in my failure.  One day, messing around on our back patio, doing something idiotic I’m sure (don’t judge – you’ve been there), a twig on the ground caught my eye – I picked it up and realized it was an orange incisor (the orange is from iron in the enamel – those suckers are strong!).  I was so excited and incredulous that I had to rush inside to see if it fit.  Of course, it did.  Not until about a week later did I think: “maybe the other one is around the same place.”  I really didn’t believe that it would be, since my maceration tubs were several yards away, and I’m sure I looked over the patio in my initial search.  But sure enough, there it was, hardly a foot from where I’d found the other one.  So, I had a nearly complete skull, which looked a lot better, as long as I placed it at an angle on my shelf to hide that damned missing nasal bone.   I completely scoured the patio (again) to see if it had somehow been transported there along with the incisors.  No luck.

After living in that rental house for two years, we finally bought our own house up the hill.  I was cleaning up my maceration tubs in the back yard and picking up any pieces of bone and teeth I could find –not for the first time, I had visions of needing to explain myself at some point in the future; while I was innocent of any crime, I wasn’t really interested in that particular series of events.  I had picked up a few bones and found a lost nutria tooth (finally!).  I walked around with that nasal bone in my hand for about an hour.  I even put it into peroxide to whiten.  Fully two weeks passed before I realized that I had completed my squirrel skull, well over a year after I’d started.

I guess that’s how it goes sometimes.  If you are looking really hard for something and you can’t find it, stop.  It’s likely to show up later, maybe right in your hand. 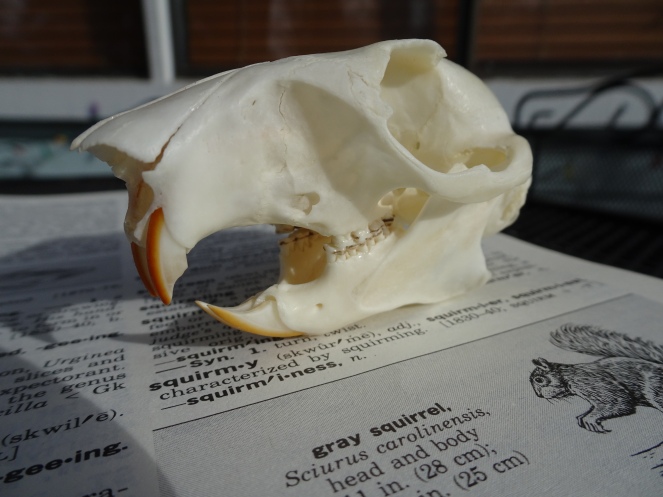 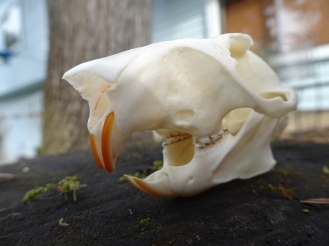 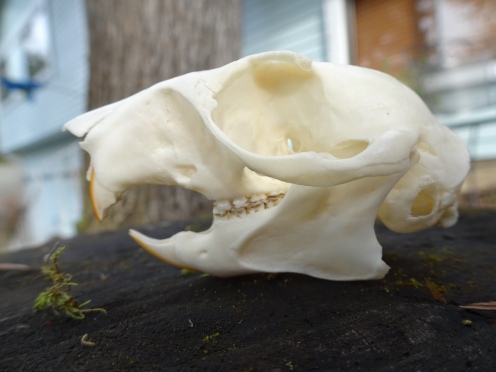