A group of bears is called a “sleuth.”

One of the black bears’ favorite foods is acorns.

Range:  All over the f*cking place!

Where I got it: Just outside of Caldwell, Idaho is a shop called Rocky Mountain Fireworks and Fur. I had decided to start collecting skulls when our pet rabbit died in Boise (more on that in a later post). I visited this shop months before, curious about the giant warehouse style building with “FIREWORKS” plastered all over it, and discovered the “fur” part. As we headed out of Idaho, packed up and moving back to Oregon, I knew I had one last chance to visit this place (and actually buy something). I pulled head-first into the tiny parking lot and shot past the fireworks, american flags, leather wallets, fireworks, and headed straight for the skulls shelf. They had a few different animal skulls, some snake skins and beaver pelts, some turtle shells.  But I was looking for a bear skull, and there was a real gem in the back – the largest bear skull on the shelf, and a real good looker to boot. I walked to the counter, plopped down my $65. I must’ve looked like an idiot, because the lady behind the counter looked at me sideways the whole time. But then I thought, “maybe that’s just how she looks.” I spent the next ten minutes trying to U-turn a 26-foot U-Haul with a Honda Civic in tow without jackknifing in the parking lot. I barely made it. Later, I realized that the skull had some sort of shiny patina. I hadn’t noticed this at first, because all of their skulls were shrink-wrapped. Unfortunately, I thought this was “correct” so I ended up sort of ruining a few skulls (including the bunny – I’ll get to that one) by spraying them with shellac to mimic this skull’s finish. I thought that the bones needed to be sealed somehow. Through later research (mostly reading Jana Miller’s exhaustive guides on the subject), I found that bones, when properly processed, do not need any further special treatment. Another thing I discovered, the bottom front teeth were glued in incorrectly – the left and right sides were swapped. I was able to soak the jaw to loosen the glue and replace them properly. It’s weird how much it bothered me and how satisfied I was when it was fixed. It’s like the skull was just a piece of garbage before, but a prized treasure afterwards. I imagine that feeling intensified about a thousand-fold is how OCD sufferers live their days. There is a slight yellowing to the skull, which I do not think was present when I first got it – I believe (though what the fuck do I know, really) that this is indicative of bleaching; I’ve found that the word “bleach” is equivalent to “cunt” in the skull and bone processing community – people squirm when you say it and you might get slapped. Apparently, while bleach will initially make bones white, it makes them brittle and they will, over time, yellow. Which is ironic.
Anyhow, this was my first proper skull. It’s probably the 2nd largest I have. I love it dearly. 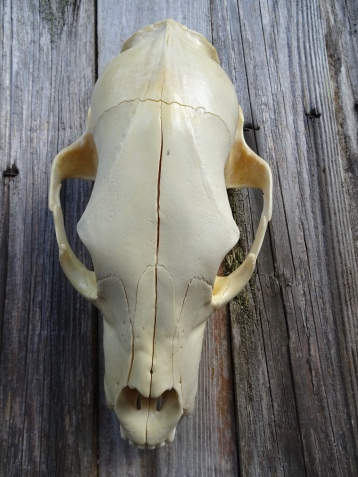 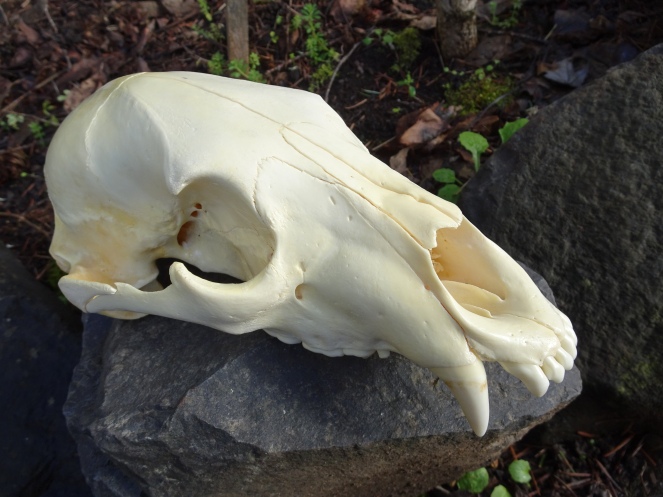 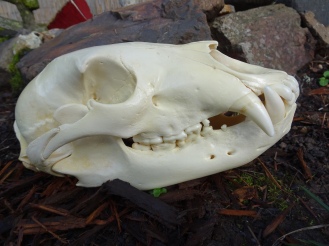 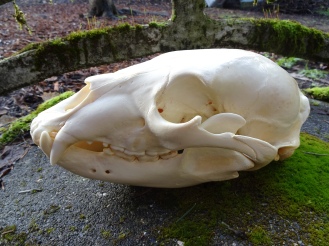 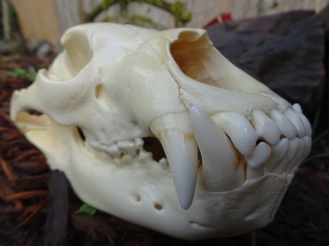